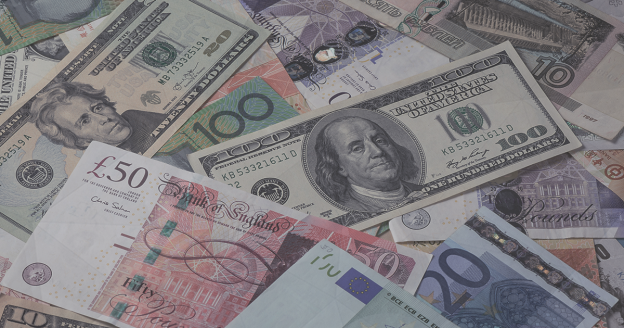 Whether you’re an investor or trader, you can benefit from identifying currencies that trade above or below their fair value.

However, not all currency pairs behave the same – some are extremely liquid and have very tight spreads, while others are volatile and difficult to trade. In this article, we’ll cover how to identify good investing and trading candidates and what currency pairs are the best to trade.

Before we dig deeper, let’s first cover the main differences between investing and trading. Investing has a longer-term approach to the markets than trading.

An investor hopes for a rise in prices in the long run based on a variety of fundamental factors and, usually, doesn’t pay attention to shorter-term price corrections. This means that, besides a good understanding of market fundamentals, an investor also needs to have sufficient amount of capital at hand to withstand negative price fluctuations in the short and medium term.

Investors don’t want to follow the market on a daily basis and often adopt a position trading style, holding their positions open for months or even years.

Trading, on the contrary, has a relatively short-term perspective. Depending on their trading style, a trader can hold their positions anywhere between a few seconds to a few weeks and opens positions more frequently than an investor.

Traders are mostly oriented towards technical analysis and many of them disregard fundamental analysis completely, as they believe that market fundamentals impact prices only in the medium and long term.

In addition, trading usually requires a much lower capital outlay as stops are tighter than in investing, with many traders actually trading price-corrections as well. Plus, many traders take advantage of leverage, allowing them to open a much higher position size than their trading capital would otherwise allow, but also increasing the associated risks.

Find out the different types of margin products you can trade:

Learn how to trade with leverage:

A great approach to find the best currencies to trade and invest in is to look at their fair value.

So, how to determine what currencies are overvalued and what undervalued? Longer-term investors often use traditional currency valuation models to measure the fair value of a currency, such as:

If you’re interested in measuring the fair value of currencies in the long run, check out these models above.

In this part of the article, we’ll focus on more popular techniques used by retail traders, that are mostly focused on shorter-term trading and technical analysis.

Moving averages are a very popular tool among Forex traders, but did you know that they can help you determine the fair value of a currency pair as well?

If a currency pair trades above both MAs, there’s a high chance that the currency pair becomes increasingly overvalued. Similarly, a market that trades below both MAs can be considered undervalued. Since markets have a tendency to return to their mean value, a trader could use the zone between the faster 20-day MA and the slower 50-day MA as the fair value zone.

Take a look at the following chart of EUR/GBP. The blue line represents the 20-day MA and the red line the 50-day EMA. Each time the pair broke above or below both MAs, the price returned to its fair value zone (orange circles). 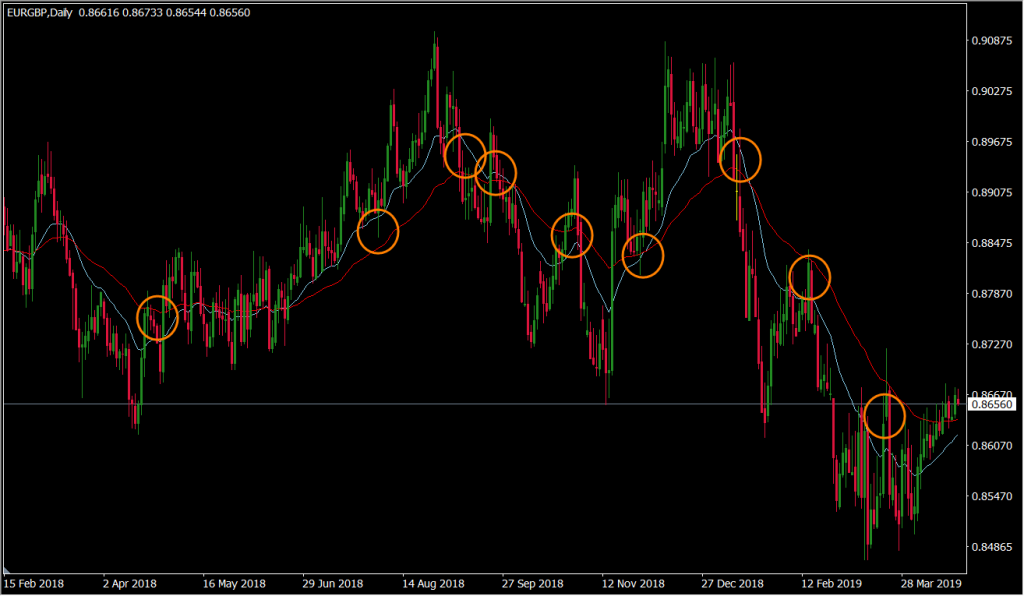 Measuring the current risk sentiment is a great way to find trading opportunities in the Forex market.

Risk sentiment shifts and fluctuates regularly, and certain currencies tend to benefit from it while others often fall in value. As a rule of thumb, if risk appetite among market participants is high (i.e. risk-on), then traditional safe-haven currencies, such as the Swiss franc and Japanese yen, tend to fall in value. Currencies such as the Australian and New Zealand dollar often rise in value in risk-on market environments.

The tricky part about this approach is how to measure the current market risk. Some traders use the VIX index which measures the expected volatility in the stock market, while others like to follow news and headlines to determine whether the sentiment is in risk-on or risk-off. A recent example: The US-China trade war sent shockwaves through the markets and caused a deterioration in risk appetite (i.e. risk-off) among investors and traders.

Besides determining which currencies are overvalued and undervalued and measuring the current risk sentiment of markets, certain currency pairs often offer better trading opportunities than others regardless of market conditions. Highly-liquid currency pairs, such as EUR/USD, offer tight spreads which reduce trading costs and allow you to enter into the market at any time without or with minimal slippage.

Cross pairs, especially those that include the British pound, are often quite volatile and offer a greater profit potential than less-volatile pairs. Exotic currencies take that to an extreme as they’re the most volatile currencies in the market and often carry very high trading costs.

However, traders live on volatility, and those currencies shouldn’t be neglected in trading if you’re an experienced trader.

The EUR/USD pair is the most actively traded currency pair in the Forex market. The US dollar is involved in nearly 90% of all currency transactions, while the euro has a share of slightly above 30%, making them the most traded currencies in Forex.

For traders, this means enormous liquidity and tight trading costs – the tightest among all major pairs. In fact, most beginners in the market start trading by making their first trade in the Euro vs. US dollar pair. However, bear in mind that high liquidity can mean a slow market at times. 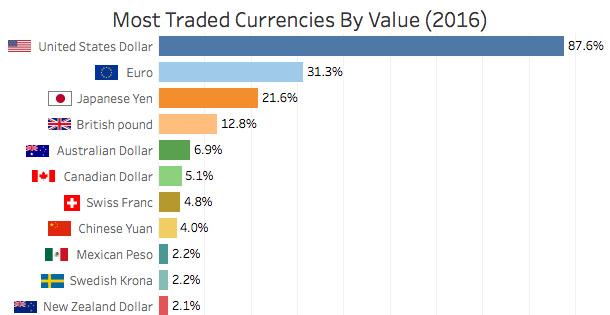 The USD is the most traded currency by value

The fourth most traded currency in the market, the British pound, has been a favourite currency to trade for many Forex traders.

Cross-pairs, such as GBP/JPY, GBP/AUD, and CAD/GBP are famous for their extreme volatility, especially in times of important news releases. If you want to trade these currency pairs, try to use a smaller position size and always keep an eye on your risk metrics to avoid large losses.

These currencies can have extreme price-moves and volatility at times, offering a large profit potential to traders. Besides economic fundamentals, political risks in emerging market economies also need to be considered when trading those currencies.

I recommend you read more about the 16 most popular currencies in the world today.

Finding the best currency to invest in starts with your trading style. If you’re a longer-term investor, you’ll better off analysing market fundamentals that drive exchange rates in the long run and determining the fair value of currencies.

However, even if you’re a shorter-term trader, you can still determine the zone of fair value by using two moving averages. Currencies tend to return to their fair value over time which can provide profitable trading opportunities.

In our latest article we’ll take a closer look at the enormous market of derivative contracts, cover their pros and cons, and explain the main types of derivatives.