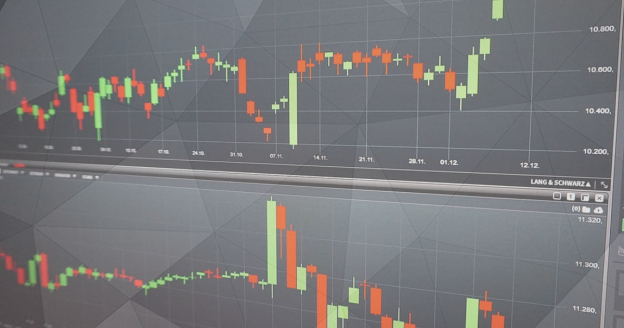 Trading graphs are an essential tool in the technical trader’s toolbox.

They allow traders to perform technical analysis and predict future price-movements by analysing past price-action of a financial instrument. Price-charts are used in almost all financial markets, such as the stock market, Forex market or commodities market.

There are many types of price-charts, such as line charts, bar charts, candlestick charts and Heikin Ashi charts.

While all of them have certain advantages and drawbacks, by far the most widely used type of price-charts are Japanese candlestick charts. In the following lines, we’ll list some of their most important characteristics.

1) Line Charts – Line charts are the most basic type of price-charts. A simple line connects all closing prices of a financial instrument and is then graphically represented in the form of a chart, as shown in the following image. 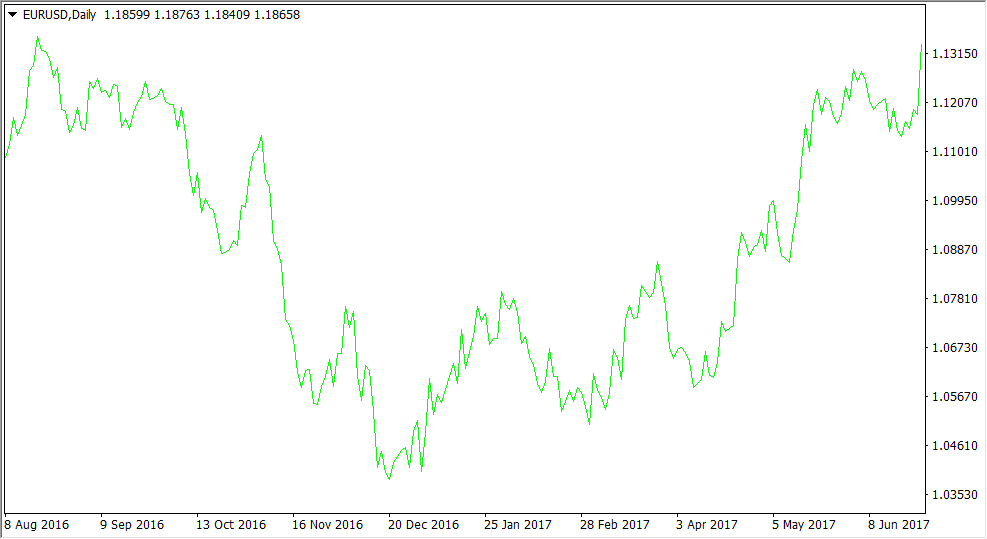 Example of a Line Chart 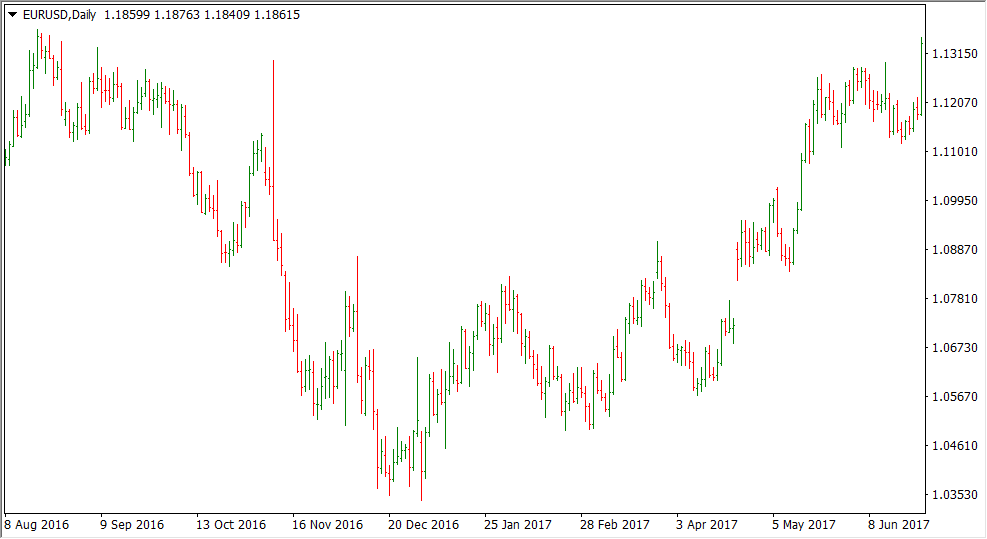 Example of a Bar Chart

They carry the name “Japanese” because of their origin – they were first used by Japanese rice traders in the 19th century. 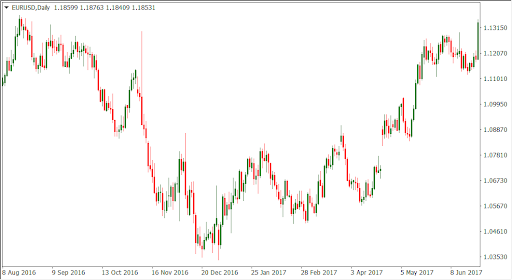 4) Heikin Ashi Charts – These charts are very similar to candlestick charts, with the main difference that the opening and closing prices of Heikin Ashi candles are calculated in a slightly different way.

The opening price of a Heikin Ashi candle is located at the mid-point of the previous candle’s body, while the closing price is the arithmetic average of the opening, high and low prices of the current candle. A Heikin Ashi chart is shown in the following image. 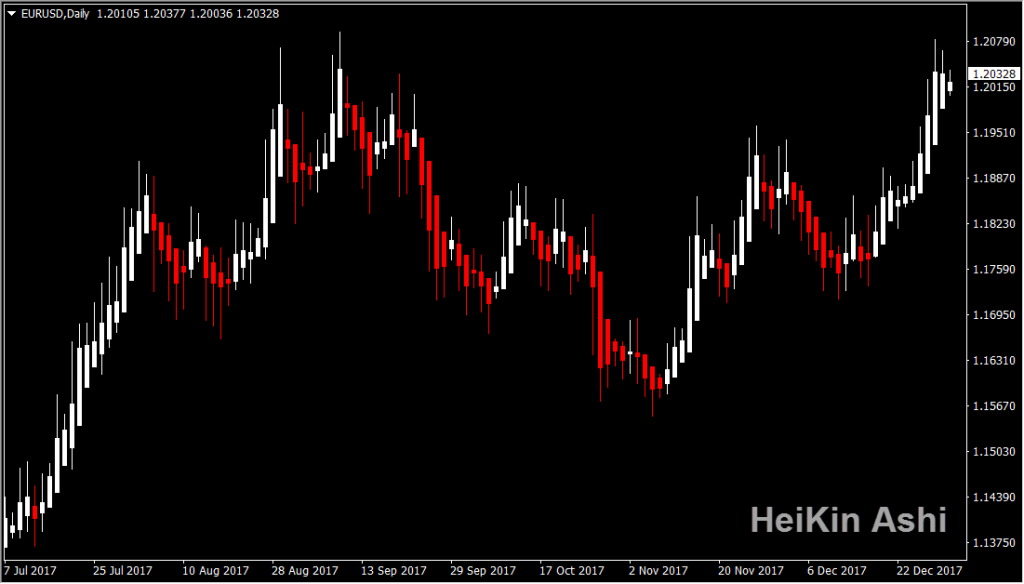 Example of a Heikin Ashi Chart

Did you know?
Japanese candlestick charts were first used by Japanese rice traders in the 19th century.

How to Read Candlesticks? 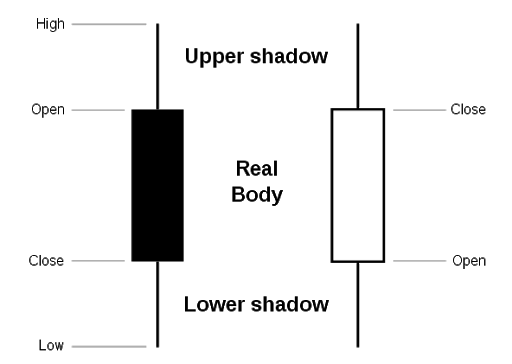 In essence, there are two types of candles – bullish and bearish ones.

When to Use Candlestick Charts?

Candlestick charts can be used whenever you need a price-chart to make trading decisions. These type of charts is used in all financial markets and on all timeframes, as it provides valuable information about the open, high, low and close prices of a trading session.

In addition, these pieces of information are represented in a graphically appealing format which makes it much easier to identify bullish and bearish trading days and candlestick patterns than with bar charts.

How to Interpret Candlestick Charts?

As you already know, candlestick charts are formed by single candles which provide plenty of information about their trading session.

In this regard, candlestick charts reveal a lot of information about the battle between buyers and sellers during a trading period. Many traders rely on candlestick charts to predict future price-movements of a financial instrument by analysing so-called candlestick patterns.

We’ll take a closer look at candlestick patterns in the following lines.

How to Predict Candlestick Charts?

As a type of price-charts, candlestick charts are often used by technical traders to perform technical analysis and predict future price-movements based on past price-action. Technical tools, such as trendlines, support and resistance levels, chart patterns and peak and trough analysis can be successfully performed on candlestick charts and in any financial market.

Besides the mentioned tools, candlestick charts are also often used in combination with candlestick patterns. These patterns form by a single candlestick or a group of candlesticks and are mostly used to confirm an identified trade setup before entering into the trade.

How to Enter a Price Action Trade

As said, candlestick charts represent the battle between bulls and bears in a graphical way, and the information contained inside a candlestick (open, high, low and close prices, length of a candle’s body, position of the body etc.) can be used to anticipate which side has won and which side will dominate the following trading – buyers or sellers.

Tip
Don’t base your trading decisions only on candlestick patterns. Instead, use them as a confirmation tool to enter into a trade setup backed by other technical tools.

View: 9 Day Trading Books You Can’t Do Without

In the following lines, we’ve listed the main candlestick patterns which are widely used by technical traders. 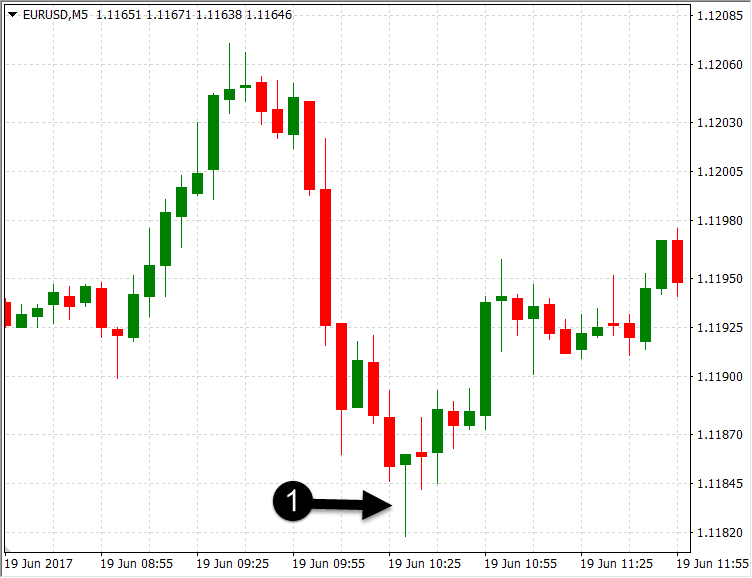 Example of a Hammer Candlestick

A Hammer pattern is a single candlestick pattern which forms at the bottom of a downtrend. It has a long lower wick and a relatively short body. While the colour of the body is not much important, the pattern is slightly more bullish if the closing price is above the opening price.

The long lower wick signals that sellers had the upper hand initially, but buyers managed to push the price near the trading period’s opening price. An Inverted Hammer pattern looks like a regular Hammer pattern turned upside down, forms at the top of an uptrend and signals that the uptrend is about to reverse. 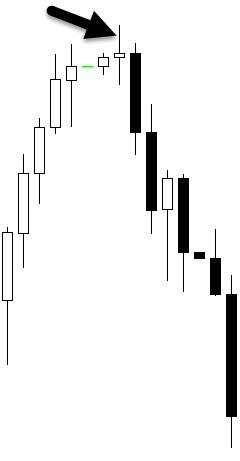 Example of a Spinning Top Pattern

A Spinning Top pattern is a single candlestick pattern that signals indecision in the market. It has long upper and lower shadows and a relatively small real body, signalling that both buyers and sellers managed to push the price above/below the opening price.

The closing price, which is near the trading session’s opening price, signals that both buyers and sellers finished the trading period in equilibrium.

Examples of a Hanging Man Pattern

A Hanging Man pattern (1) is a single candlestick pattern characterised by long lower wicks which are at least twice the size of the candle’s body. A Hanging Man pattern signals that sellers are regaining their power by managing to push the price significantly below the opening price. 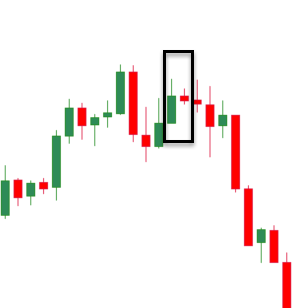 Example of a Harami Pattern

The pattern got its name from the Japanese word “Harami” which means pregnant, as the second candlestick looks like the child of the first candlestick inside the pattern.

In less liquid markets, the candlestick in the middle can open with a gap away from the first candlestick. However, in liquid markets such as Forex, gaps don’t occur that often and the Shooting Star pattern is then valid even without the gap.

Last but not least, Doji patterns are a very powerful candlestick pattern that consists of a single candlestick. A Doji doesn’t have a solid body at all, which means that opening and closing prices are exactly the same. The candlestick can have upper and lower wicks.

A Doji pattern usually signals indecision in the market, as neither buyers nor sellers managed to push the price above/below the opening price. This can be quite bearish during uptrends (i.e. buyers are losing steam and sellers are regaining power), and quite bullish during downtrends (i.e. sellers are losing steam and buyers are regaining power).

A typical Doji pattern is shown in the following graphic. 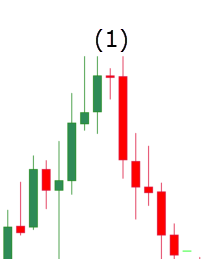 Example of a Doji Pattern Candlestick

On the other side, a Dragonfly Doji comes without upper wicks, i.e. the opening and closing prices are located right at the highest price of the trading period.

Gravestone (1) and Dragonfly (2) Dojis are shown in the following chart. 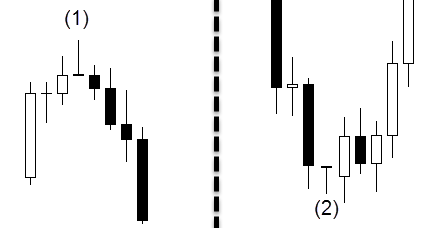 Examples of a Gravestone Dragonfly

Candlestick charts are a type of OHLC (Open, High, Low, Close) price-charts which can be used in all financial markets and in the trading of all financial instrument. Steve Nison introduced Japanese candlestick charts to the Western trading world three decades ago, making this price-chart one of the most popular and most widely used in the trading community since then.