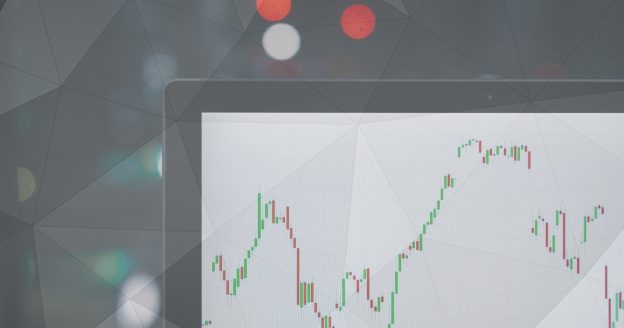 If you’re just starting out with trading and technical analysis, you need to cover the market’s foundations. Identifying key chart tools and knowing how to trade them plays an important role in your trading performance.

Support and resistance levels form the basis of many technical price-levels and are essential tools in any technical toolbox.

In this article, we’ll cover what key chart levels are, how to spot and trade them, and answer a few common questions that beginner traders have when it comes to support and resistance trading.

What are Key Chart Trading Levels?

Key chart levels are important technical levels at which a financial instrument could face increased buying or selling pressure.

When the price reaches a key resistance level, sellers may jump into the market and send the price lower again.

Types of Support and Resistance Levels

There are many types of key chart levels which act as important support and resistance levels in the chart. We’ve outlined the most common ones in the following lines. 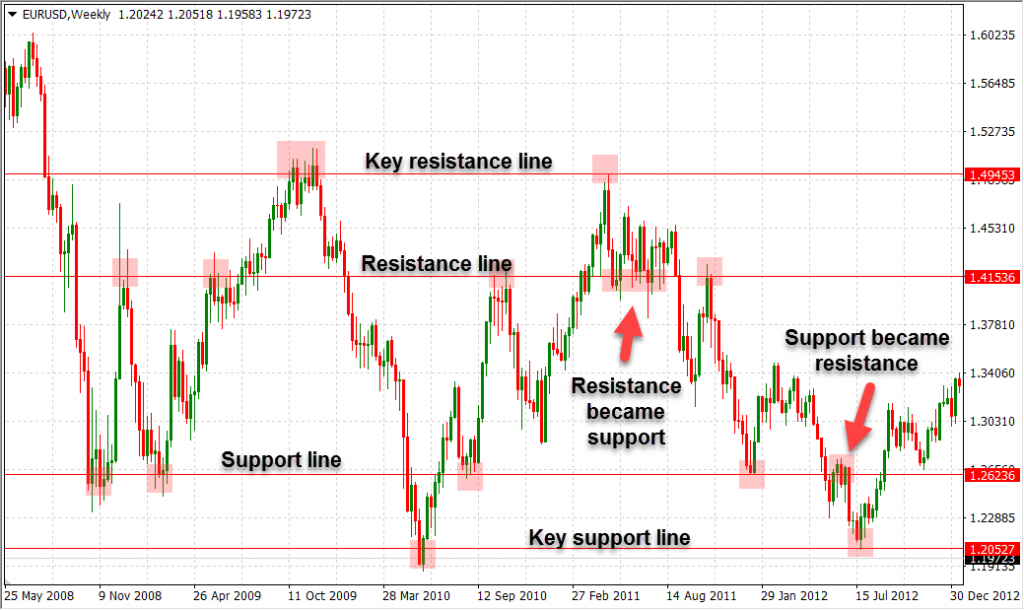 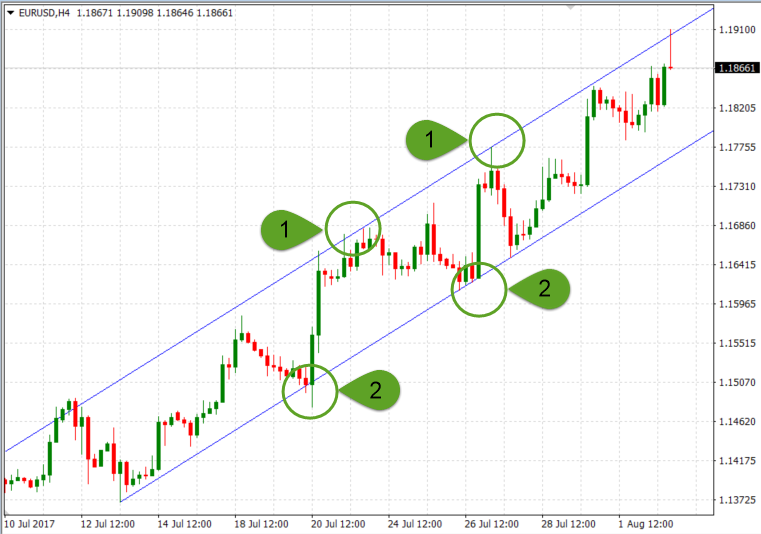 Points (1) and (2) acted as resistance and support for the EUR/USD pair, respectively, identified by a simple rising channel. Just like with rising channels, the lower boundaries of a downward sloping channel act again as support levels, while the upper boundaries act as resistance levels for the price. Channels are quite similar to trendlines, only that they include a second trendline which is drawn parallel to the first trendline.

3. Round-Number Key Chart Levels: These levels form around round-number exchange rates, such as 1.00, 1.50, 0.50, 1.25 etc. The psychology of market participants shows that traders tend to place their market orders around round numbers, increasing the buying or selling pressure around those levels.

How to Trade Support and Resistance

If you’re serious about your career as a trader, you need to learn how to trade support and resistance levels early in your trading career.

Higher timeframes are more reliable when it comes to trading key chart levels, because a larger number of market participants pays attention to those levels. That’s why you should focus on higher timeframes, such as the daily and weekly ones, and bear in mind that support and resistance levels on timeframes lower than the 4-hour one could produce a lot of fake signals.

Pro Tip #2: If you miss a break of a key chart level, wait for a pullback to get into a trade 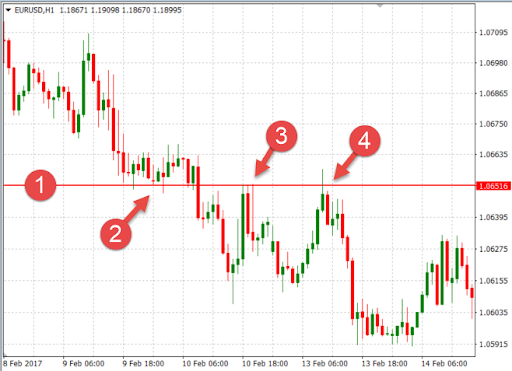 Example of a broken support level with pullback

Channels and trendlines are essential tools in any technical trader’s toolbox. They are used in finding uptrends and downtrends in the market by connecting higher lows in uptrends and lower highs in downtrends. Again, try to focus on higher timeframes when using trendlines and channels in trend-following trading strategies, as market trends tend to be more predictable in the medium and long-term than on an intraday basis.

Deutsche Bank published a great research paper on the Forex market and asked FX dealers to rate the predictability of market trends in the short, medium and long run. The table below shows the results:

That’s why using support charts and resistance charts that include a few months of data are likely to produce better results than shorter-term charts.

Let’s take a look at a few common questions regarding support and resistance trading.

How to Trade Moving Averages as Support and Resistance

The following chart shows how 50-period, 100-period and 200-period EMAs can work as dynamic support and resistance levels for the price. The 200-day EMA is especially important and followed by a large number of traders. The scenarios of the price testing dynamic S&R levels drawn by EMAs are shown in red circles. 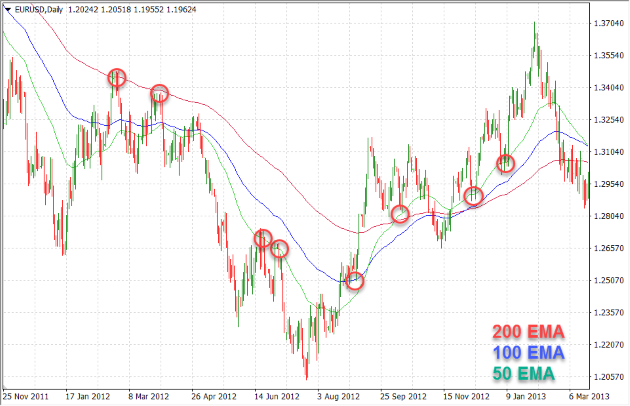 How to Trade Support and Resistance Zones on 15-Minute Trades

Many retail traders focus on day trading, especially in the beginning of their career. Short timeframes such as the 5-minutes or 15-minutes ones are often used by these traders to get the thrill that day trading provides. That said, trading on such short timeframes can often lead to costly mistakes and the accumulation of losses.

As Elder Alexander puts it in his famous book, Come Into My Trading Room,

“… the great paradox of day-trading is that it demands the highest level of discipline, while attracting the most impulsive, addictive, and gambling-prone personalities. If trading is a thrill, then day-trading provides the best rush. It is a joy to recognise a pattern on your screen, put in an order, and watch the market explode in a stiff rise, stuffing thousands of dollars into your pockets. A former military pilot said that day-trading was more exciting than sex or flying jet aircraft.”

Whenever the price reaches towards the longer-term, but the 15-minutes chart sends an opposing trading signal, your best bet would be to stay away from trading.

Read: Why Day Trading Doesn’t Work (And How To Solve It)

How to Set Support and Resistance Lines on MetaTrader 4

As one of the most popular trading platforms for retail Forex traders, chances are you're using MetaTrader 4 or 5 as your primary trading software. The good news is that it’s easy to set support and resistance lines on the MetaTrader 4 platform.

Step 1: Open the currency pair that you want to analyse
Step 2: Select the 4-hour or daily timeframe to draw key support and resistance levels first

Step 3: Identify obvious swing highs and lows and draw a horizontal line on them. In the case of a price trending, use trendlines or channels to connect the highs or lows 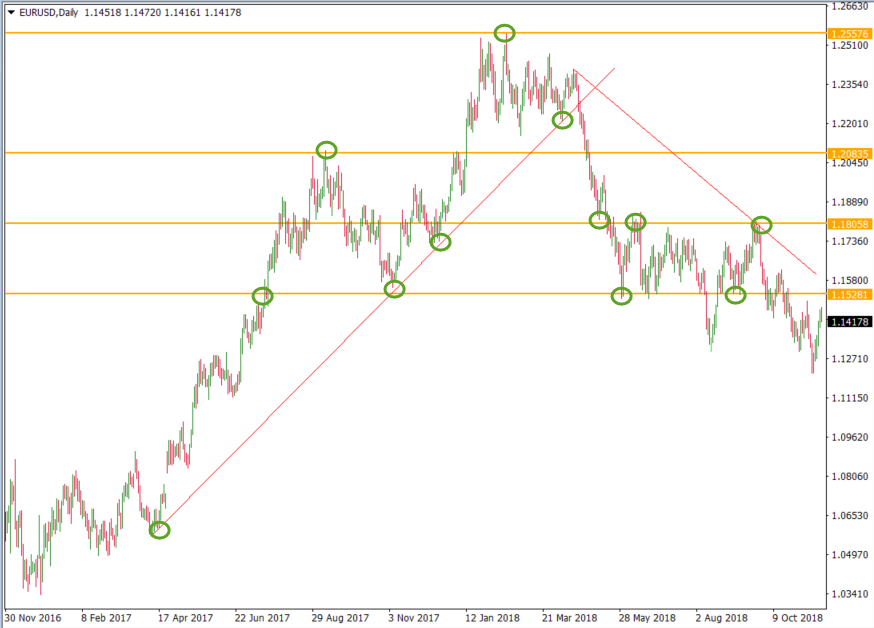 Example of drawing tend channels to connect highs and lows

When all is said and done, key chart trading levels are important

Despite the fact that these levels form the foundation of many technical tools, they’re relatively simple to identify and trade. Many trend-following trading strategies rely on key chart levels to spot areas of major buying and selling pressure.

This is done by using trendlines and channels. If the price reaches a channel’s boundaries, there is a high chance of a price correction or reversal. Learning the ins and outs of trading key chart levels is best achieved by studying financial trading, experience and screen time.