4.How Does Forex Work?

The Forex market is one of the most exciting markets to trade amongst all the available financial markets.

It’s the largest and most liquid, open 24 hours a day from 5 p.m. EST on Sunday until 4 p.m. EST on Friday, and you can take advantage of it from almost any country.

So, ready to jump into the world of Forex?

Before you start trading with real money, let’s review what Forex trading is and how it works. We’ll explain everything you need to know about currency trading before you start using your Forex broker and their trading platform. 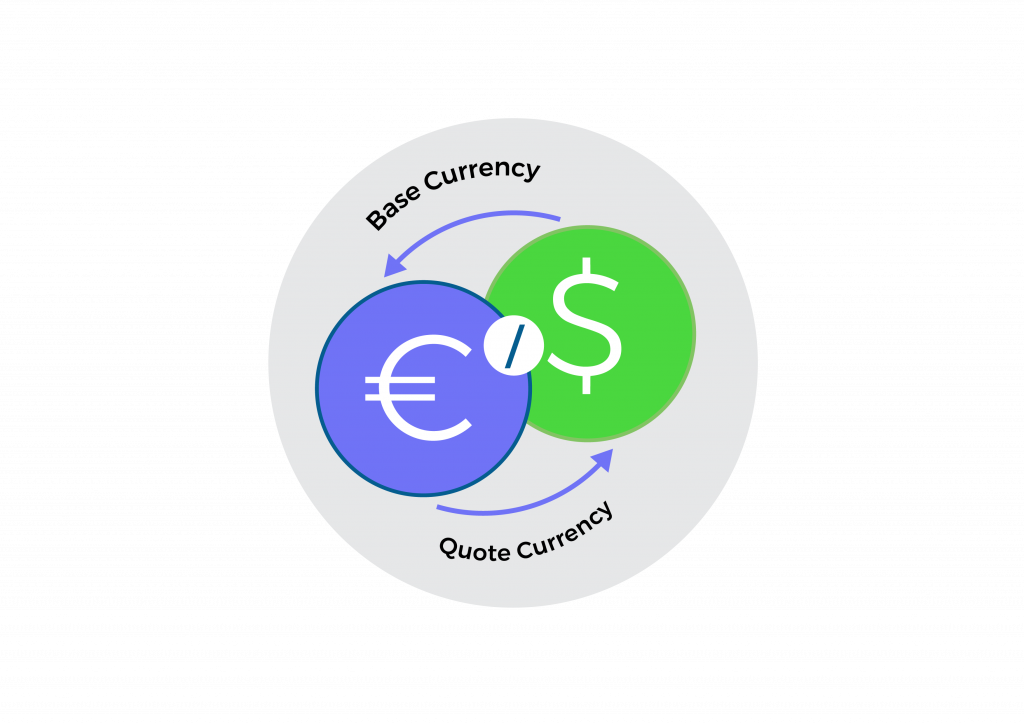 Currency pairs have a base and quote currency

When trading the FX market, you’re investing in currency pairs.

The currency exchange rate represents the changes in value of one currency compared to another one, such as the USD compared to the EUR.

The exchange rate can either be floating – meaning changing from one day to another, or pegged to another currency, or a basket of currencies – meaning that the value of the exchange rate is at a fixed rate, such as the Saudi Riyal to the U.S. Dollar at 3.75.

Let’s look at the EUR/USD – the Euro and the U.S. Dollar.

What does investing in pairs mean?

It means that you’re effectively buying one currency while simultaneously selling another one.

The base currency is always the currency you’re buying when you’re trading a currency pair, while the quote currency is the one you’re selling.

Base currency vs. Quote currency

From there, you have two trading opportunities: either you open a buy position, or a sell position – it depends on the scenario you are looking at.

If you think that the EUR is likely to increases in value against the USD, then you would buy the EUR/USD currency pair, or “go long”, because you believe that the EUR is “bullish”, while the USD is going to weaken, or is “bearish”.

Conversely, if you believe that the EUR is likely to weaken against the USD, then you would open a position to sell the EUR/USD, or “go short”.

Whether you’ll make profit or loss depends, naturally, on whether you were correct in your prediction.

Theoretically, you should be able to trade any currency in the world. However, you’ll only have access to those offered by your Forex broker.

The 2016 Triennial Central Bank Survey from the Bank For International Settlements (BIS) shows that the USD is the dominant currency, as “it was on one side of 88% of all trades in April 2016” since April 2013.

There are 6 currency pairs that account for more than 80% of total Forex trade. These are called the “majors”:

Minors, also called crosses, represent currency pairs that are less traded – usually without the U.S. Dollar – but they do contain a major currency:

Finally, an exotic currency pair usually consists of one major currency against a currency from a smaller or emerging economy:

Read: These Are the 16 Most Popular Currency Pairs You Can Trade

The example below represents the quotation of the EUR/USD.

You may also notice that the buying price is always higher than the selling price (Ask price > Bid price). The difference between these 2 prices is called the spread, which your broker pockets as their commission.

Usually, currency pairs are displayed with 4 decimal points (with the one exception being the Japanese Yen, with only 2 decimals). Some platforms quote currency pairs beyond this standard “4 and 2” decimal system with a “5 and 3” scheme, as in the above example.

When a currency pair increases or decreases, this change in value is measured in units that are called Pips, which is a one-digit movement in the 4th or the 2nd decimal.

Read More: What is Tick Size and How much is it Worth?

Read: What are Key Forex Chart Levels? (And How to Trade Them)

#4 Leverage and trading in Forex

When trading the Forex market, you’ll actually have access to a much larger amount of money than what you deposited into your account.

This is because your broker will “lend” you a certain percentage of a given position’s value, with your own funds being used as a kind of “good faith deposit”.

This is known as “leverage” or “gearing”.

By granting you higher market exposure, leverage in Forex implies that a single pip movement can be amplified. For this reason, many Forex traders find leverage very appealing.

Remember, however, that leverage trading is also risky, as it can produce substantial losses as well as profits.

What moves the FX market?

There are several factors that influence the value of a given currency.

Of course, the most important one is the evolution of the relationship between supply and demand.

If the demand for a given currency increases, or if the circulation of the currency in the economy decreases because of a Central Bank’s decision, then the price of this currency will tend to strengthen – and vice-versa.

#5 Keep an eye on the economic calendar

The economic calendar helps you keep an eye on the most iimportant publications, reports, statistics, and speeches that can impact currency exchange rates and create profitable trading opportunities.

Better than expected statistics can positively impact the supply and demand relationship, as traders prefer to invest in strong and promising economies.

Even if you use technical analysis to make your investment decisions, it is important to know the fundamental events that can increase volatility and the risk appetite in the financial markets.

Keeping abreast of current events will help you avoid being surprised if there is a strong movement on the currency pair you are trading.

Read: 7 Day Trading Techniques of the FX Market (That Will Make You Money)

#6 Factors that shift the markets

Remember that there are:

considerations that can affect the demand levels of a given currency.