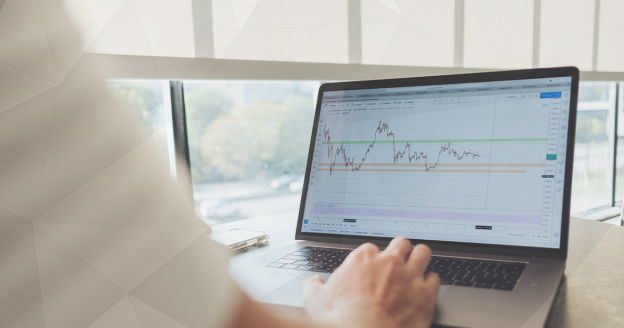 Do you want to hold your trades for a longer period of time, without constantly checking your charts?

Do you want to increase your profit potential with wider profit targets and limit your losses to relatively small amounts?

Then take a look at swing trading.

Unlike day traders, swing traders hold their trades for a few days and aim to catch “swings” in the price, i.e. moves that mostly go in one direction.

That’s why swing trading has a larger profit potential than day trading – trades are held for longer and it’s not unusual for profit-targets to be set a few percentage points away from the entry price.

In the following lines, we’ll provide a short introduction into swing trading, its main advantages and disadvantages, and explain profitable swing trading strategies that you can use right away.

What is Swing Trading?

Swing traders aim to catch price-swings in the market that go in one direction. Have you ever seen short-term trends in charts that last up to a few days, with the price going strongly in one direction? That’s a swing and a swing trader’s dream.

Swings form over and over again in the markets, whether you’re trading stocks, Forex, or metals. They offer great profit potential if you catch them early in their nascent phase, with very attractive reward-to-risk ratios.

The following chart shows typical swings that last for a few days. 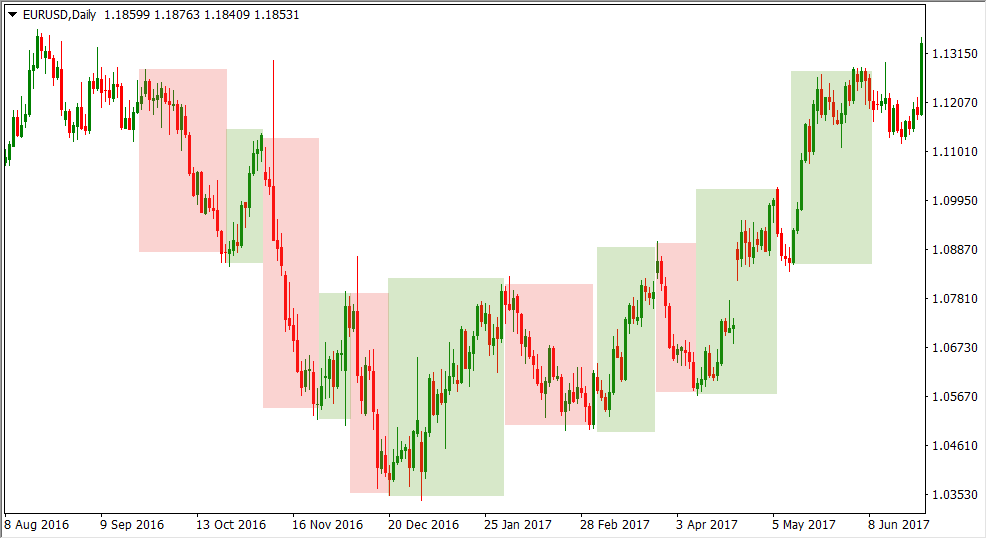 As you already know, the main difference between swing trading and day trading is that swing traders hold their trades for a longer period of time, including overnight. Additional differences are trading costs, the time required to spend in front of a screen, and trade management.

Since swing traders take a smaller number of trades than day traders, they usually face lower trading costs as well. Day traders usually take a few trades per day as they trade on shorter timeframes that provide more tradeable opportunities. Swing traders, on the other hand, need to have patience and wait for a trade setup to occur on longer-term timeframes, such as the 4-hour or daily ones.

Swing traders also spend less time in front of their trading screen than their day trading peers. Day traders need to actively manage their trades, while swing traders let the trades perform over a few days. This makes swing trading a great alternative to day trading for traders who have a full-time job.

Pros and Cons of Swing Trading

Now that you’ve learned the main characteristics of swing trading, it’s time to move on to the most interesting part of this article – Swing trading strategies!

One of my favourite swing trading strategies is to buy low and sell high during an uptrend. The same strategy can also be used when trading downtrends, only that you would look to sell high and buy low.

You may be asking yourself “But, how do I know how low to buy, how high is high enough to sell?”

We’re going to answer that now, but first, let’s take a closer look at how trends develop.

There’re two main types of trends: uptrends and downtrends. Uptrends are characterised by the price making consecutive higher highs and higher lows, while downtrends are formed by consecutive lower lows and lower highs. The absence of a trend is called a ranging (or sideways moving) market. 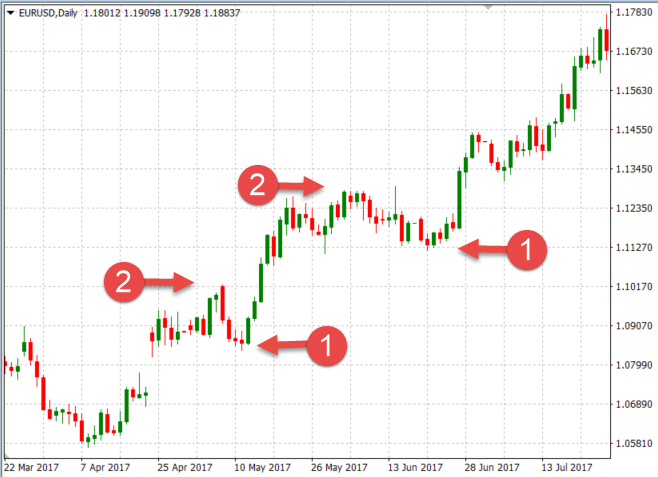 Higher lows usually form around recent support zones or previously-broken resistance zones that now act as support zones. Look for those important technical levels when trying to identify the low of a higher low.

Your trading platform will automatically draw Fibonacci levels on your chart. Look for the 38.2% and 61.8% Fib levels as potential retracement levels for the price.

Bear in mind that strong trends tend to have shorter retracements and could find support at the 38.2% Fib level, while weaker trends usually have larger retracements that may reach the 61.8% Fib level.

The chart above shows a higher low formed around the 38.2% Fib level during a strong uptrend. A stop-loss level should be placed just below the higher low, while the recent higher high could act as the first profit-taking target.

If you want to hold your trade longer, then bear in mind that the Fibonacci levels above 0% (so-called Fibonacci extensions) often act as a resistance for the price and can be used as profit-taking targets.

So, What Do You Include a Journal Trading Spreadsheet?

Buying highs and selling lows (or vice-versa during downtrends) works great when the market is trading. But, how to swing trade the market if there is an absence of trends? Trading the range is all about that.

This can be observed in the following chart. Notice the support and resistance zones in the chart, and the swings that the market forms after the price reaches one of those zones. 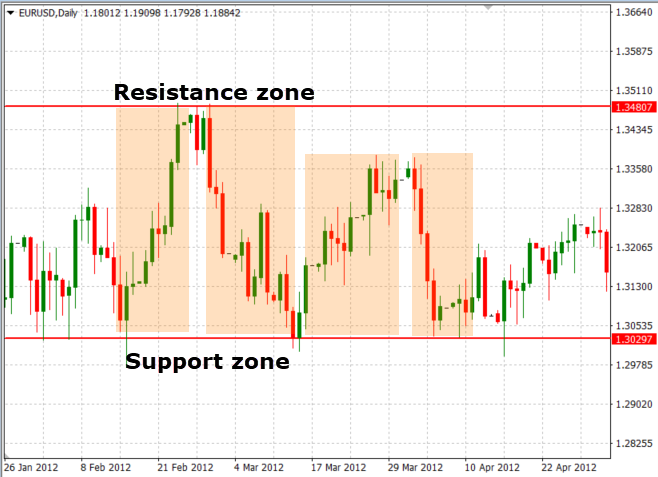 Support and resistance levels work because market participants remember price-levels where the market had difficulties to break above or below. As a result, they place a large number of orders around those levels which creates enormous buying and selling pressure.

Profit-taking activities also cause a reversal of the price after it reaches support or resistance zones. Investors who were long need to sell in the market to take profits, creating selling pressure in the market which sends the price down.

Similarly, investors who were short need to buy in the market to take profits, creating buying pressure in the market which sends the price up.

When trading support and resistance zones in a ranging market, I personally like to wait for fake breakouts combined with bullish and bearish divergences in oscillators, such as the Relative Strength Index.

Fake breakouts occur when the price is seemingly breaking above a resistance zone or below a support zone, only for the price to return to the “range” with the next candlestick.

Fake breakouts occur for a number of reasons, such as when a large number of stop-loss orders around S/R levels get triggered. In a fake breakout above a resistance zone, sellers are joining the market again as they perceive the new price to be too high, i.e. overbought.

Similarly, in a fake breakout below a support zone, buyers are jumping into the market as they perceive the new price as an attractive price to buy the financial instrument. These activities send the price inside the range again and show traders that higher/lower prices are currently rejected. 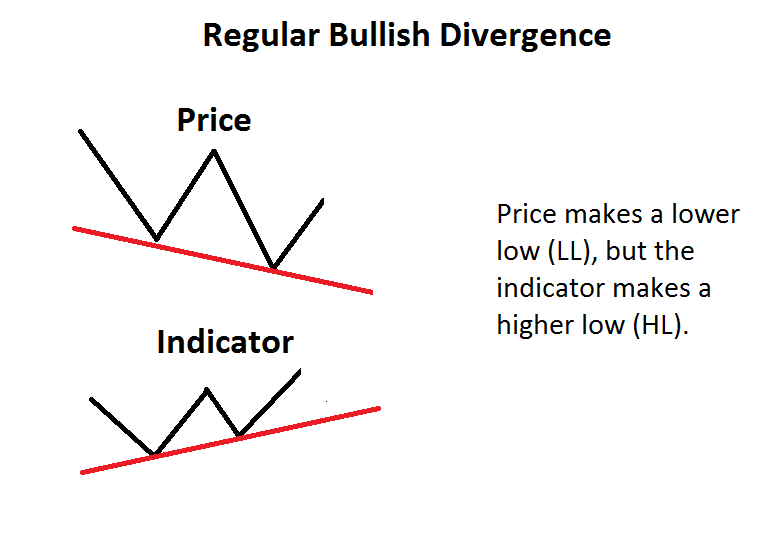 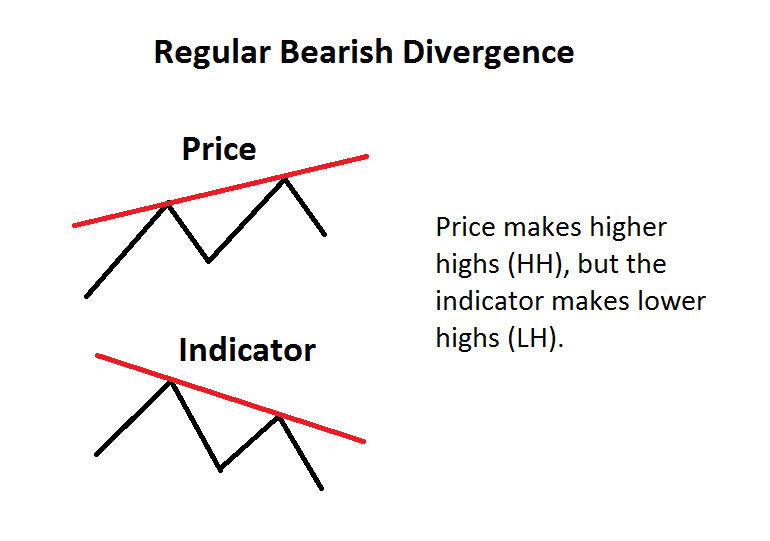 Don't forget!
Wait for a confirmation before entering into these types of trade – fake breakouts, divergences or reversal candlestick patterns can significantly increase the success rate of trades based on this trading strategy.

Trading against the momentum can be quite risky for inexperienced traders. If you’re new to swing trading, then start with a trend-following strategy first before getting your feet wet with counter-trend trading.

It takes experience to identify a slow-down in the established momentum and a potential trend reversal. That’s why we’ll use tight stop-loss orders to limit losses – if our trade hits stop-loss, we don’t want to stay inside that trade as it shows that the underlying momentum (trend) is resuming.

Here’s an example of a trade against the momentum. 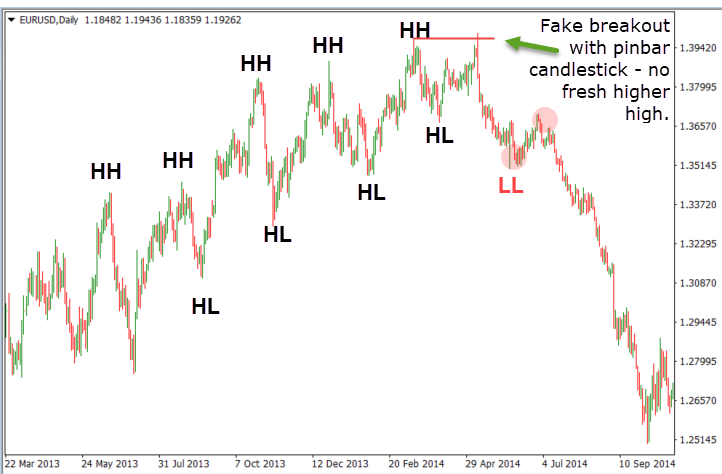 The EURUSD pair has been in a long-term uptrend, forming consecutive higher highs and higher lows. The green arrow shows the place where the uptrend started to lose momentum. It formed a fake breakout with a long upper wick, a so-called pinbar pattern that often signals a reversal. 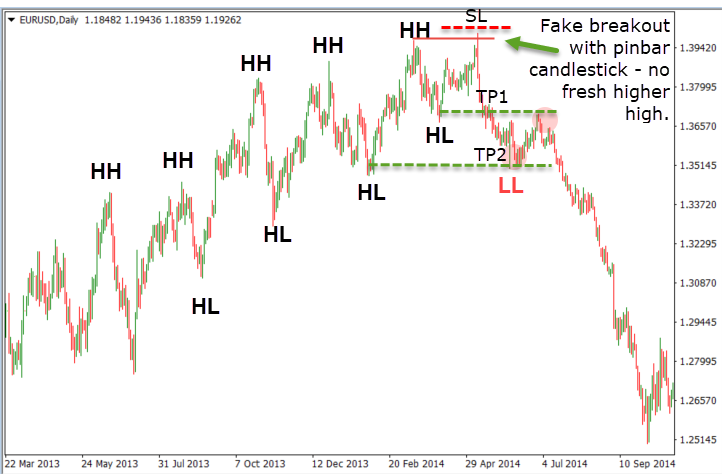 When profit-taking activities of market participants who’ve already been in the market send the price back to the broken support or resistance level, those pending orders get triggered and push the price in the direction of the initial breakout. In general, this is how a pullback forms. 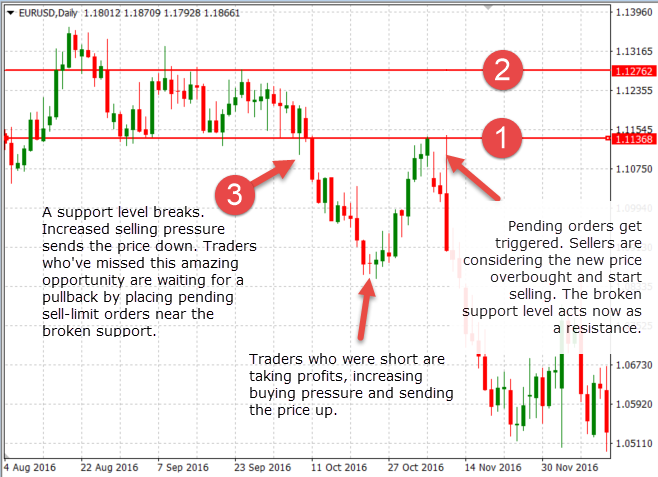 When trading pullbacks, a stop-loss should be placed just above the broken support level for short positions, or just below a broken resistance level for long positions. Traders can take profits at the recent swing high or swing low.

Tips for Success with Swing Trading

Most of the trading strategies explained in this article are purely technical and require holding your trades during important news releases. That’s why we place our stop-loss levels at strategic levels – if a market report pushes a trade against you and causes a support or resistance level to break, take the loss and move on.

Besides day trading, swing trading is one of the most popular trading styles among traders, whether they trade stocks, currencies, commodities or stock indices.

Swing traders hold their trades longer than day traders, often up to a few days or even weeks, aiming to catch the swings (“moves”) in the market. This leads to lower trading costs and trade setups with higher profit opportunities. In addition, swing traders don’t need to manage their trades all day long, which means more free time.

To enjoy all the advantages of swing trading, you need an effective and well-defined trading strategy. Trend-following strategies (buy low, sell high) usually return the best results to traders who’re new to the world of trading. If the market is not trending, you can easily switch to trading the range until the market starts trending again.

Occasionally, if there are neither trend-following nor range setups in the market, trading pullbacks can return amazing results (also, feel free to combine pullback trading with trend-following and range trading.) Finally, trading against the momentum should be done only by experienced traders as this strategy involves taking trades against an established trend.